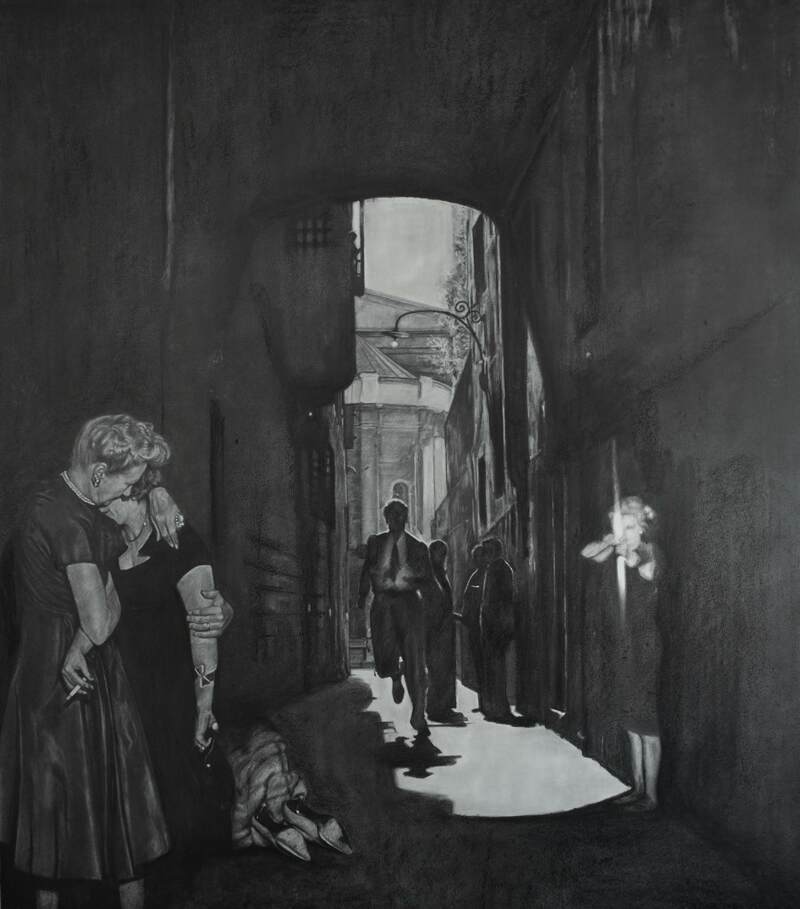 I walk alone - a drawn collage about the tragic ambivalence of the fame of prominent actors. In the fictional setting, Fowler brings together stars from the 1940s to the 1970s in a stage-like tableau, connected by the struggle for self-assertion in a life determined by celebrity. We see Talullah Bankhead in a poisoned embrace by Hedda Hopper, Marlene Dietrich cowering hidden from the gaze of strangers, Douglas Fairbanks Jnr. anonymously on the run, and Anita Ekberg in a supposed defensive pose with bow and arrow, which may be in fact only reflections of the flashes of paparazzi. 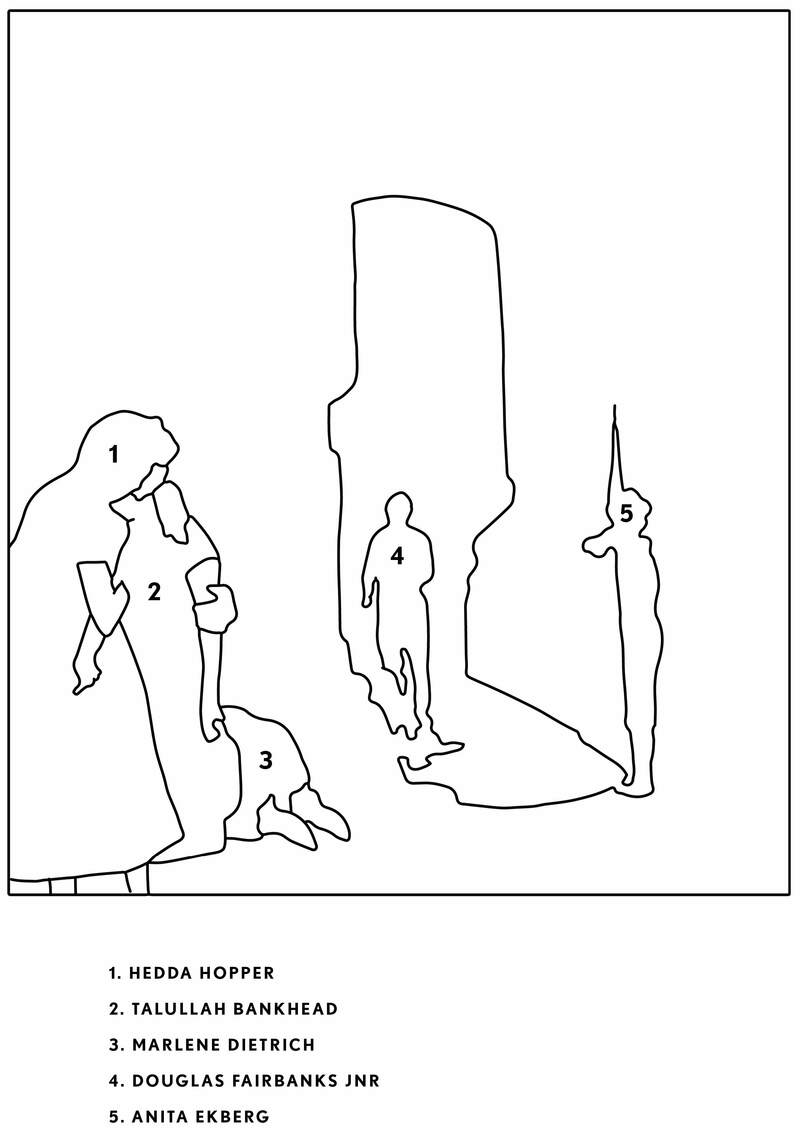 »Key« for decoding the tableau of I walk alone

Nina Fowler’s artistic roots lie in sculpture but today she is known above all for her expressive pencil and charcoal drawings often made in black and white. The works show prominent actors and actresses which Fowler mostly captures in unusual, fateful and often tragic moments. Many motifs originated in film scenes and ostensibly present the actor in his role. The roles played often seem to reflect the life of the performer in a tragic way, meaning that the drawings based on film stills also appear to be a reflection on the personal fate of well-known persons.

Fowler thereby directs our gaze under the glamorous surface of the film, music and fashion world which we can follow today in real time through the eyes of many millions of cameras as a global phenomenon, and makes us aware of the fateful inner conflicts in the seemingly perfect life of a star. The realisation that even a life that seems glamorous on the outside, can have dark flip side that stays hidden for a long time until it breaks out with force in fateful turnarounds and ends up in the flashlights of the public eye, is not really new. »However, Nina Fowler finds an unusual form in which above all the graphic potency of the artist, born in 1981 in England, stands out« (K. Fischer, FAZ, 05.08.2013 [translation]). 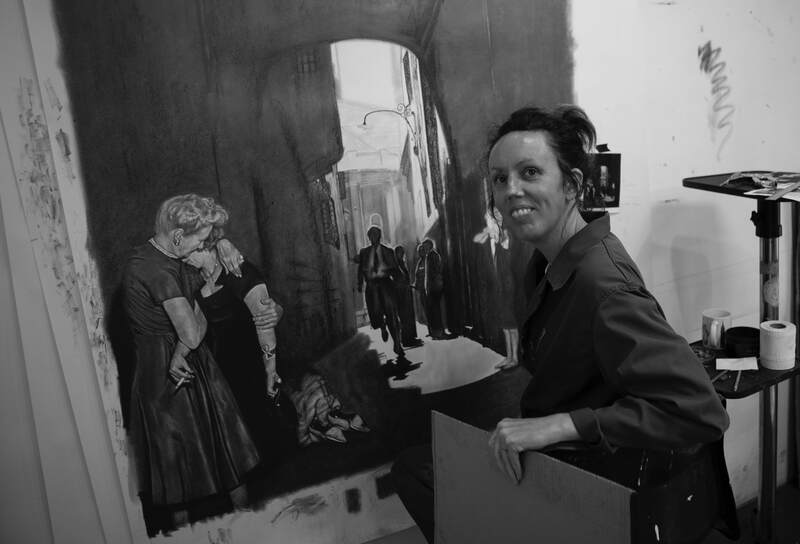 Complex compositions such as I walk alone are created over a long period of time in an elaborate conceptual phase and are without doubt among the artist's most outstanding works. The viewer is explicitly invited to decipher the scenery himself and derive his own narrative from it, although the representation is based on multi-layered considerations that Fowler herself has explained for us:

»These composite drawings come together over extended periods of time. Sometimes I live with a background image for years before I find the other elements which I want to collage into the narrative. Occasionally I have a theme for example swimming pool or running and I build up an archive of images which come under these umbrellas. For I Walk Alone I had a number of references I was drawn to but it wasn’t until I layered them into the image of Douglas Fairbanks Jnr running towards us and away from the light that I saw the theme I hadn’t even realised I was bringing together - the press/media.

On the left, in the foreground, 1940’s gossip columnist, Hedda Hopper consoles an inebriated Tallulah Bankhead at a party thrown in the stars honour. Almost like a trap, alcohol/drugs are provided, photographers on hand and with a little guidance Tallulah is sure to provide fodder from tomorrows column, despite the two of them supposedly being friends. This is true in so many cases today and throughout the history of entertainment - addictions are encouraged by providing the means to feed them to keep the addict performing and their audience quenched, more often than not the results are tragic. 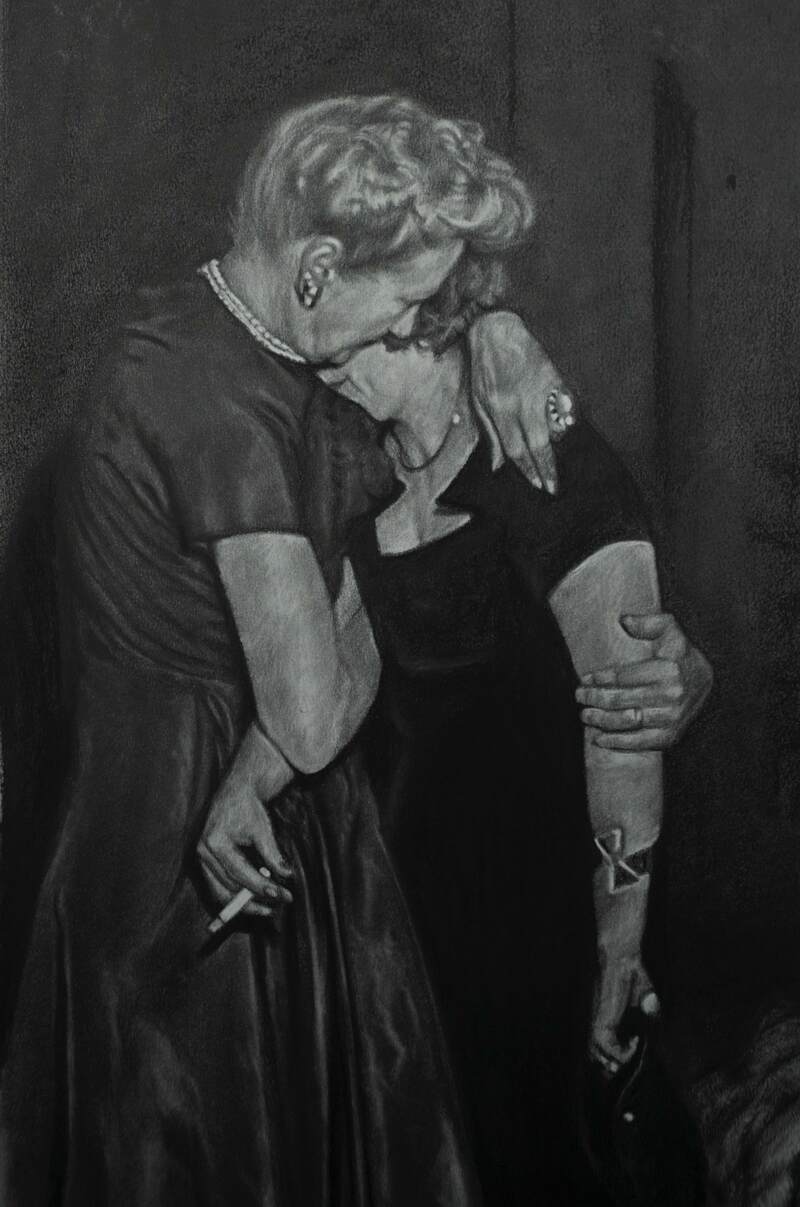 Emerging from behind this questionable embrace we see the heels and fur coat of Marlene Dietrich. This is taken from a photo of her hiding in the back of a vehicle as she is driven away from the fanatical crowds and cameras. The soles of her shoes worn out from performing for them, the glamour fades as she tries desperately to disappear from her immediate surroundings. 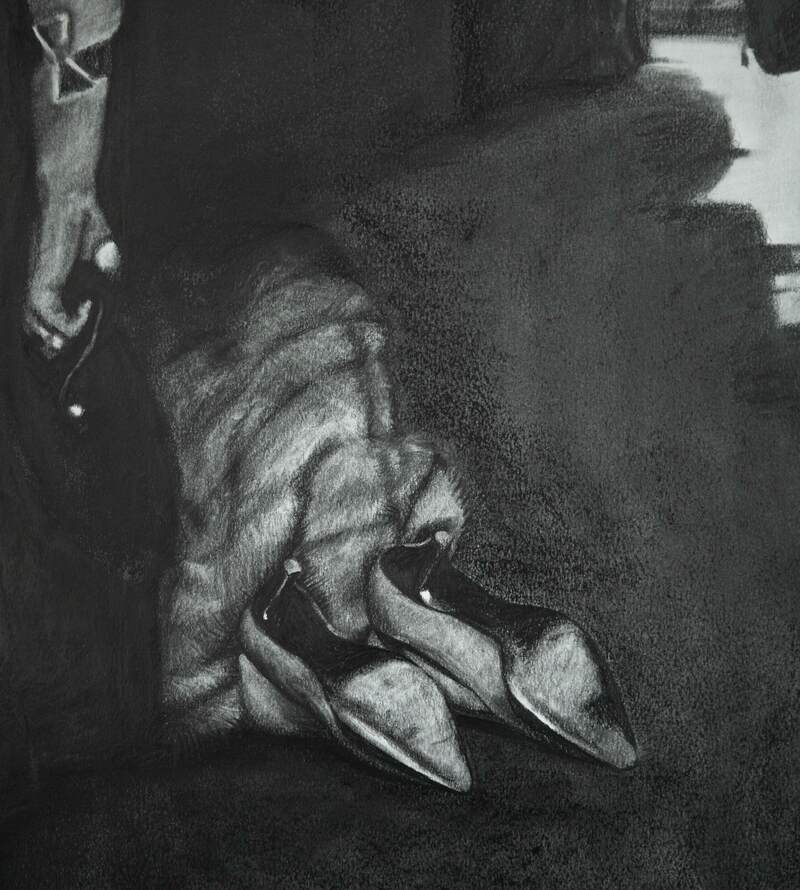 Douglas Fairbanks Jnr (son of the megastar) became popular in the 1920-40’s seemingly aided by a reputation for womanising. He was named in connection with the Profumo Scandal in the 60’s but his career never suffered from the rumours of promiscuity in the same way a female stars most certainly would have. In this drawing he runs, anonymously, toward the women occupying the darkness of the foreground. 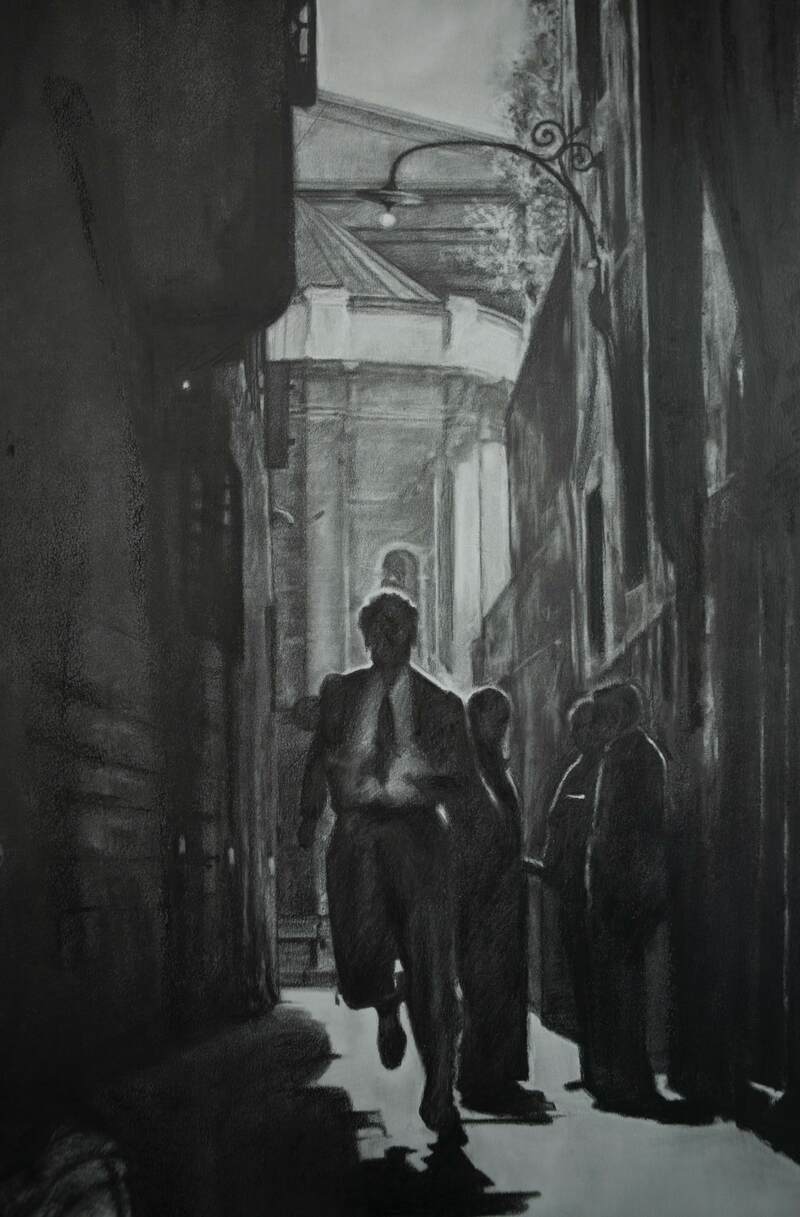 Detail of I walk alone - Douglas Fairbanks Jnr on the run

The final element of collage stands alone on the right - the light from a paparazzi camera bulb reflecting in her cross bow. The original image is of Anita Ekberg, barefoot in her driveway, protecting herself from the press photographers as they hounded her at home. 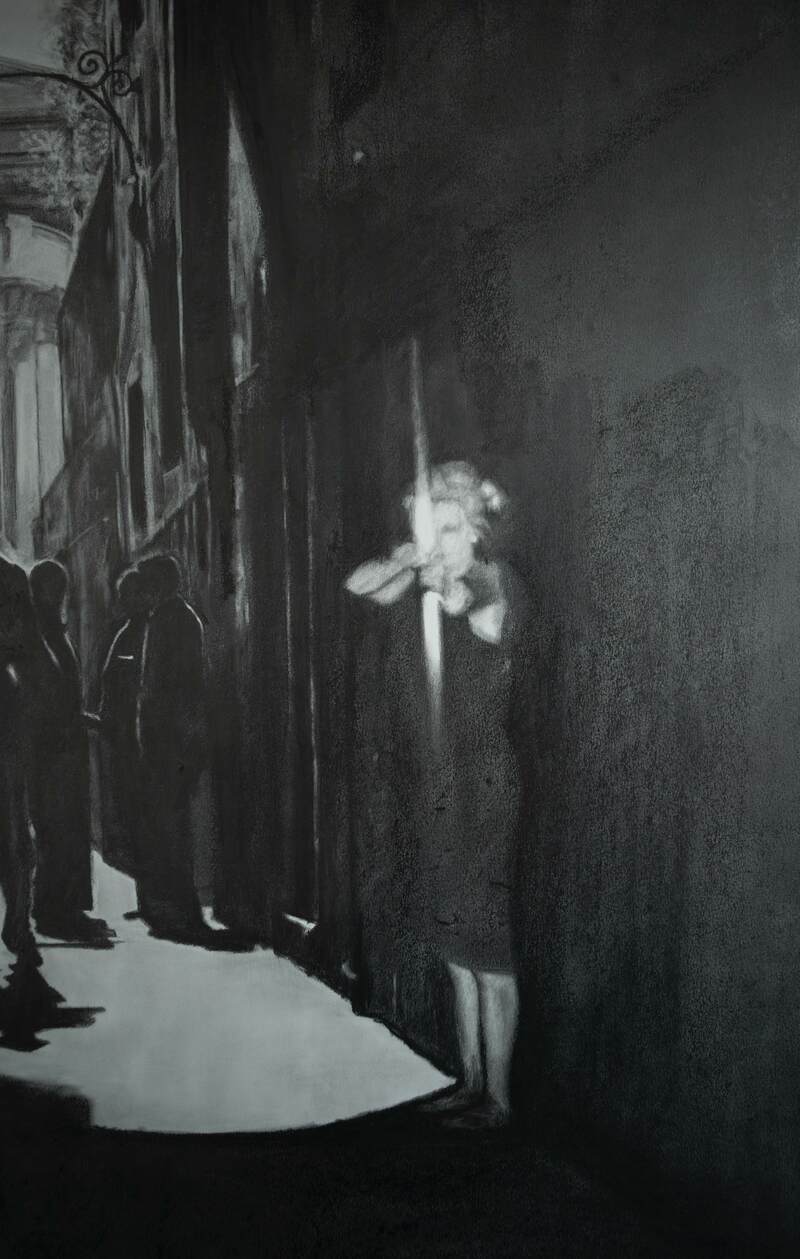 Detail of I walk alone - Anita Ekberg, the light from a paparazzi camera bulb reflecting in her cross bow

Brought together all these elements seem to make a drawing about the press as opposed to their subjects (all faceless in this composition). Although we can’t see them it is clear that the work is about their intrusion into the lives of the famous and as always, our voracious appetite for the outcome - tragic, undignified, relentless and unfair.«

In her works, Nina Fowler deals with a theme that spans the ages and nevertheless strikes a chord with the times. Thus it is not surprising that her drawings are represented in the collections of numerous celebrities such as Jude Law, John Maybury, Sharleen Spiteri, Caroline Issa and Ridley Scott as well as in the National Portrait Gallery in London, the Colección Al Limite in Santiago de Chile and the Try-Me Collection in Richmond (Virginia, USA).