Autodidact with handicap seeks springboard into the art market

Andreas Maus reaches into the shelf and pulls out a black book. His Anne Frank book. He opens it and describes the motifs of his paintings. »And now here are all the torture scenes from the Third Reich,« he says. Maus prefers to deal with the Second World War in his paintings. He paints the scenes with coloured ballpoint pens. He scribbles, strokes, lines up squiggles. His aesthetic is always the same: Eine brennende Frau im Bombenhagel auf Deutschland 1940 (Engl. A Woman on Fire in the Bombing of Germany 1940) shows an unclothed female figure in dashed green and black flames. Her eyes are red, her mouth open in a scream. She raises her arms in the air. She has no hair. The background is composed of red circles, blue bombs are falling from the sky. Maus unmistakably places the inscription above it: »The bombing war did not spare the civilian population in Germany either. 1940-1945.«

It is a scene from the introduction video of the artist Andreas Maus on the euward website; an art prize that is special in its field: It is the »European Art Award for Painting and Graphic Arts in the Context of Mental Disability«. Maus took first place in 2021. 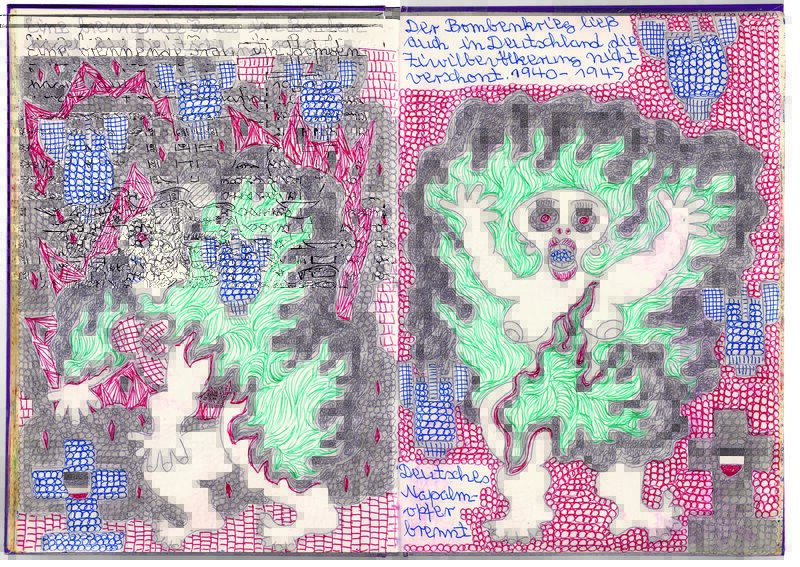 The only international prize of its kind

The euward is organised by the Augustinum Foundation, as part of a non-profit social enterprise from Munich. Since 2000, the foundation has awarded the prize every three years; in 2021 already for the 8th time. »The euward is highly coveted as the most prestigious and only international prize in this spectrum of art«, tells Klaus Mecherlein, initiator, organiser and curator of the prize. The prize is 8,000 euros in funding. On top of that, there is an exhibition at the Haus der Kunst in Munich and a catalogue. As far as the potential prize candidates are concerned, »the euward is aimed at artists who are still undiscovered by the art market, unknown artists«, Mecherlein explains. The aim is to make the artistic quality of the »cultural outsiders« visible and thus to open up their significance for art. According to the initiator, purely social aspects do not play a role. The prize is open and publicly announced, Europe-wide.

All interested parties apply for participation with a portfolio. The selection is then made by the euward board of trustees. The seven members of the board of trustees nominate 20 potential winners by majority vote and then pass them on to the final jury with the originals. The jury consists of five independent international experts on contemporary art and outsider art. Places one to three will again be decided by majority vote. Just how popular the prize is becomes clear when one looks at the number of participants: sometimes so many artists apply that it almost becomes an »intimidating challenge« for the jury, as Carla Schulz-Hoffmann, one of the euward jury members, describes it. In 2021, she and her colleagues looked through almost 400 application folders with six A4 images each.

A career in the art market is possible

From the Netherlands, the artist Kar Hang Mui has applied. In the video he says nothing but his name. The camera accompanies the third-placed artist as he works with various crayons. He pulls open a drawer: it contains countless pencils that have been sharpened down to a stump. Most of his works are untitled. So does the jungle scene - a mix of figurative and abstract flowers, plants, animals and figures. In it, he plays with dimensions. A rock formation rises up in front of the dotted mint-green sky, into which he integrates a two-dimensional bridge and has black figures walk across it. Under the bridge, fantasy flowers bloom in green, purple, yellow, red and turquoise. A huge snake moves into the picture from the left. A palm tree stands on the right. Abstract and easily recognisable animals fly in the air or wade through the green water that runs along the lower edge of the picture: a crocodile, a giraffe, parrots, owls and a cheetah.

Renowned art prizes usually pave the way for a new career stage. Is that also true for the euward? »The euward often provides the impetus for international recognition and broad interest from collectors and the art market. If we succeed in keeping this interest alive and sustainably fire the collectors' imagination, a lasting career is possible and has already happened several times.« For Mecherlein, that is a resounding yes. He cites examples such as Josef Hofer, the winner of euward3. Today, he says, he is one of the classics of »Art Brut«. Then he adds two more names: Peter Kapeller, winner of euward5, he is in the programme of the most important European Art Brut gallery in Paris, and Uschi Pomp, winner of euward2. She is represented with sixty works in the Arnulf Rainer Collection, the largest private collection of »Art Brut« and »Outsider Art«. 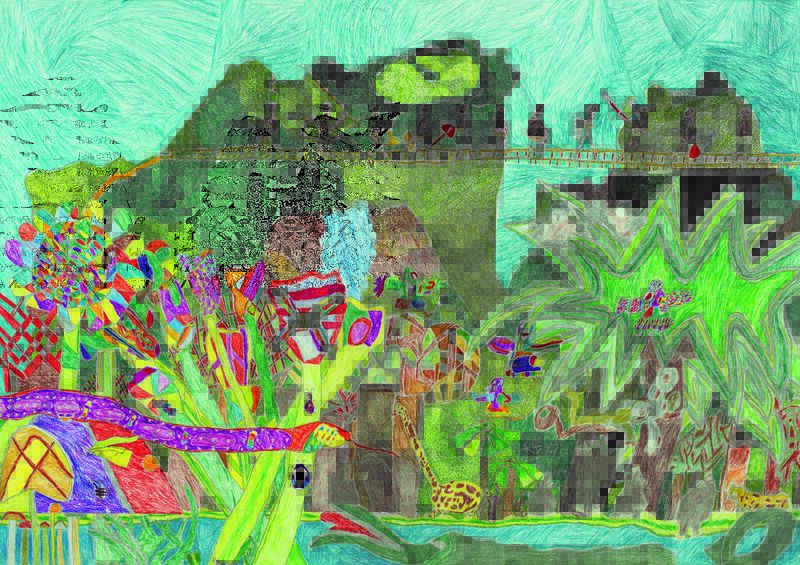 In Mecherlein's list, there is no question of classifying the artists in the genre of »Outsider Art«. The euward website goes on to say that the art of authors with an intellectual disability forms its own artistic scene within Outsider Art, that as »art in the context of intellectual disability« it can refer to the original term »Art Brut«, Mecherlein differentiates further.

»Art Brut« goes back to Jean Dubuffet (1901 - 1985) and is his original response to the term »psychiatric art« that had been circulating since the turn of the century. Dubuffet dissolved the identification of this artistic practice, which was perceived as peculiar, with illness, suffering and human deficits and finally assigned it to the realm of »art«, Mecherlein explains to us. In doing so, he had seen the source of this »raw« art entirely in the artists' own inner selves, thus untouched by influences of what he called »cultural art«, that is, academically or similarly trained art production. Dubuffet himself had already seen that his creative theory was not tenable in this pure form. He had repeatedly explained the term in new and different ways and had taken legal action against unauthorised use - »Art Brut« was ultimately what he had compiled in his »Collection de l'Art Brut«.

Second-placed Felix Brenner also points to the problematic categorisation of this art movement in his video. »I became an artist, somehow. I don't know why«, he says. His vita reads like an adventure novel: he runs away from home at 13, gets into the drug scene, consumes for years. During this time, the alternative cultural scene is part of his life: in 1987, he founds the art and political movement Blauer Planet, practices in graphic design courses at the School of Design in Basel and receives a scholarship for a stay in New York. The introduction film shows him working on a lithograph in his studio, an open garage: »Whether I'm mentally handicapped now, I don't really know. I'm also an outsider artist in principle«, Brenner's voice can be heard from off screen. The man with the tousled appearance wants to create his own style of art. He believes that his art is extraordinary: »From that point of view, I am certainly an outsider artist, but not an Art Brut artist.«

One of the lithographs for which he was awarded a prize shows himself in close-up, his lips pursed, his medium-length hair sticking out straggly. Brenner has traced them with orange curved lines. He has added a dashed blue border to the edges of the picture, like a Polaroid photo. The pale beige face supports the appearance of an ageing photograph. Brenner's eventful life has left its mark on the face with the wide-set eyes. He himself does not interpret Outsider Art as a disadvantage. 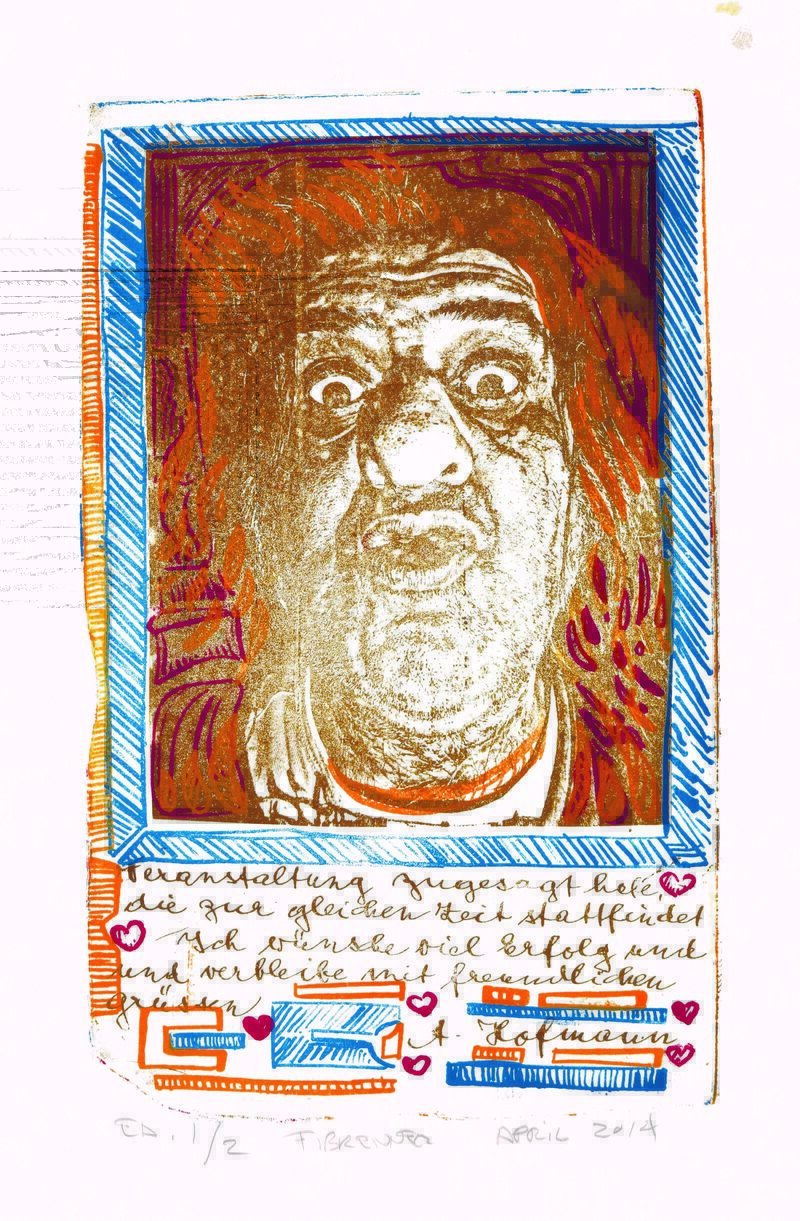 The works of the three award-winners are stylistically very different, but they are all equally assigned to Outsider Art. On the question of whether this means stigma or opportunity, jury member Schulz-Hoffmann says »neither«. In her opinion, the question only shows the general problem of one-dimensional categorisations. For a better understanding, Schulz-Hoffmann takes us without further ado into the history of the term, which has a semantic proximity to »Art Brut« but is nevertheless used differently. »Art Brut« was developed by Jean Dubuffet to create »a subversive, alternative art form for which the term art applies without any ifs and buts«. He wanted to show that there is no such thing as the art of »the mentally ill and the art of the sick to the stomach or the sick to the knee«. In contrast, according to Schulz-Hoffmann, there is »Outsider Art«. It was defined by Roger Cardinal and has become accepted worldwide as the English variant of »Art Brut«. Mecherlein explains that »for Cardinal, the outsider artist is not a discriminated social outsider, but an unintentional avant-gardist who influences art from outside the general mainstream and inspires and expands it from the margins«.

»In the difference, it becomes clear how vague the ideas about the subject are, what the individuals are about and how misleading the starting point often remains«, says Schulz-Hoffmann. The negatively connoted term outsider, which by definition implies exclusion, sheds a significant light on this dilemma: »My plea: let's rather talk about art«.

The euward promotes an open discourse

Regardless of whether the euward winners are categorised as »Art Brut« or »Outsider Art«, the prize promotes an open discourse. Those involved are aware of the sensitive subject and Schulz-Hoffmann also emphasises that her primary concern is simply to view the artists openly, independent of pigeonholes, as should be the basis of any discussion of art. What she finds inspiring about the work is that the Art Prize offers all participants a dense and inspiring forum to deal with existential themes of art, indeed, of life in general. This is what she took away not only from the jury meetings, but also from the dialogue with the participants.

The euward gives people without a straight academic career, without the right contacts or sufficient support a chance. It certainly acts as a stepping stone into the international art market for some of them. Participation on the premise of »Outsider Art« does not prevent purchase, exhibition or subcontracting by larger museums or galleries - as the cases of Peter Kapeller and Uschi Pomp prove. One could say that it opens up the rather static art market to this discourse. 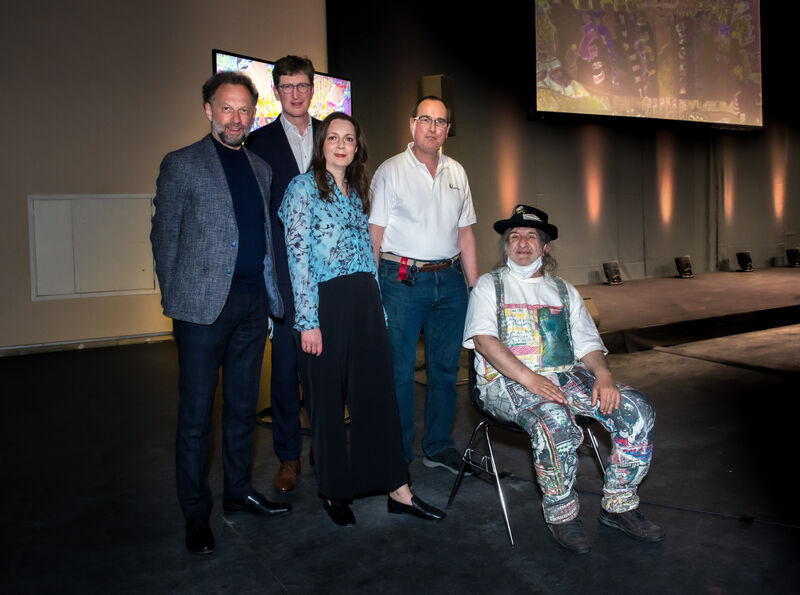 More on the subject Features 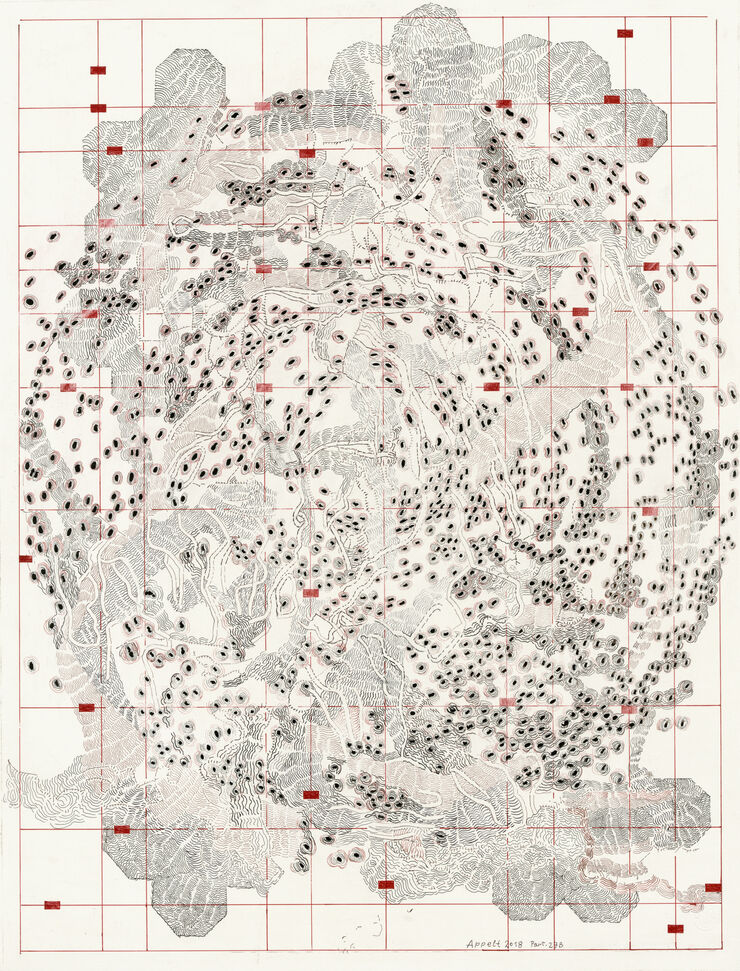 In his photographs, Dieter Appelt is interested not in the quick, not in the image, but in the existential search for the inner self. About a remarkable oeuvre of the 1970s and 80s that links photography and performance.

Rediscovered Women Artists of the 1920s

The Hidden Museum now at the Berlinische Galerie

For 35 years, the Hidden Museum has brought forgotten women artists to light. Now the museum has to face the realities of the market: Today's exhibitions can no longer be financed. A look back and forward.

museum in progress – a museum without walls

The non-profit and private art association museum in progress (mip) presents art everywhere. Whether on building facades, billboards, in magazines, newspapers or even concert halls – nothing is safe from the exhibitors.

Taking Stock of Digitalization in the Art Market 2022 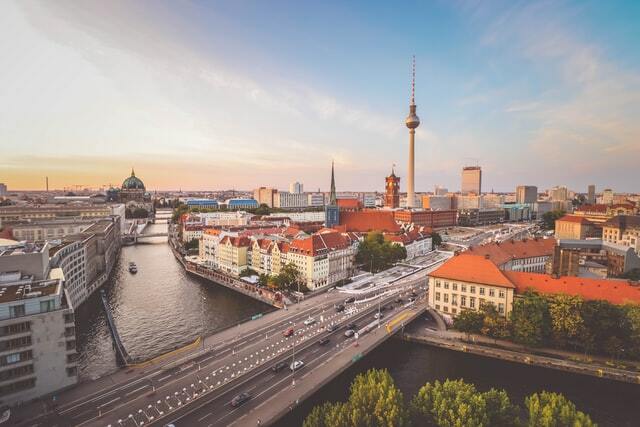 How are Berlin art galleries positioned with regard to digitalization and online sales? The Project Future of the Senate Department for Economics has now published results of a survey on the topic.