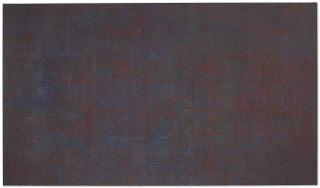 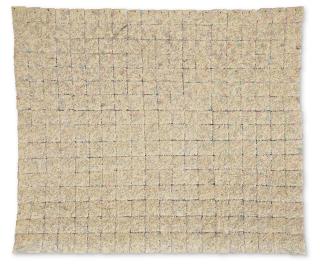 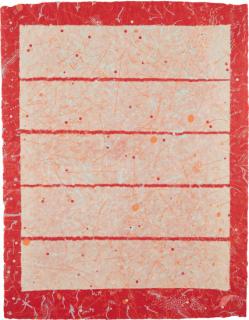 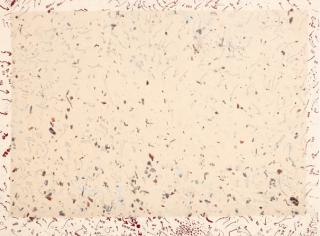 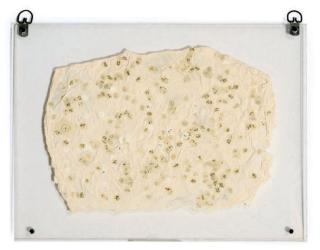 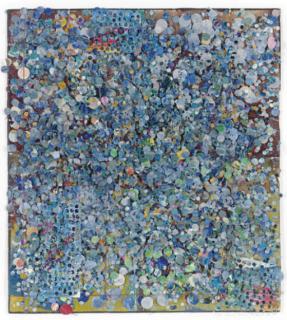 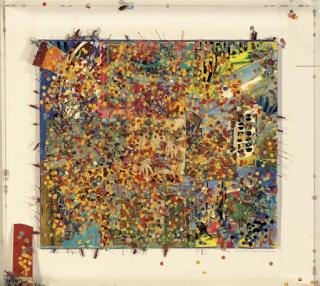 #108 Memory Test: Sorry it was an Accident
Christies, New York

Howardena Pindell achieved a seamless success story: born in Philadelphia in 1943, she went to Boston to study painting at Yale University. Immediately afterwards, she worked for twelve years in the Department of Prints and Illustrated Books at the Museum of Modern Arts in New York. From 1979 she taught at the State University of New York, Stony Brook, where she is now a full professor.

Her art is concerned with metaphorical processes of destruction and reconstruction. Surface structures and gridded serial images hold a special fascination for her – they run throughout her oeuvre. Pindell cuts canvases into strips, for example, and then sews them back together to redefine their surface. She punches holes out of paper, then passes paint through them so that it sticks to the resulting stencil and gives it texture. She continues to use this method in her later work, using it to address social issues such as homelessness, AIDS, war, genocide, sexism, and racism.

Pindell's work has been part of major group exhibitions that include Energy/Experimentation: Black Artists and Abstraction, 1964-1980 (2006, The Studio Museum in Harlem), WACK! Art and the Feminist Revolution (2007, Museum of Contemporary Art, Los Angeles), Black in the Abstract: Part I, Epistrophy (2013, Contemporary Arts Museum, Houston), or most recently Just Above Midtown. Changing Spaces (2022, Museum of Modern Art, New York) are among them.

Howardena Pindell in News and Exhibitions

David Hammons, Butch Morris, Senga Nengudi, Lorraine O'Grady, and Howardena Pindell-their common thread? They all tried their hand at the Just Above Midtown gallery in the 1970s and 1980s. A place that brought African American art to the forefront and was open to the experimental. The Museum of Modern Art recalls their spirit beginning October 9.

Howardena Pindell in News and Exhibitions