In 1999, Louise Bourgeois received the Golden Lion for her life's work at the Venice Biennale − yet she had not even created her most famous work. She devoted an entire decade to researching the mother figure, culminating in the monumental spider sculpture Maman. This and its six casts fascinate viewers worldwide.

Louise Bourgeois is an exceptional artist, partly because she created her groundbreaking works at a time in her life when others normally enter a kind of retirement. In 1999, Bourgeois received the Golden Lion for her life's work at the Venice Biennale − and immediately outdid herself the following year: In her late 80s, she produced the monumental stainless steel spider sculpture Maman, which was on display for the first time in the Turbine Hall of the Tate Modern in 2000. The nine-metre-high work of art and its six bronze casts increased Bourgeois' fame, fascinate viewers to this day and even changed some people's view of the rather unpopular arachnids.

Comparing the mother to a spider is still irritating today − probably one reason why Louise Bourgeois' spider sculptures continue to arouse great interest more than 20 years after their creation. As early as 1947, the motif made its way into her oeuvre via a small drawing. However, it only became the subject of large sculptures in the 1990s, when it also reached the general public. Bourgeois (1911-2010) worked as a child in the family business that restored antique carpets and fabrics. Her mother Josephine Fauriaux was a weaver.

That Bourgeois used the spider symbolism has even deeper reasons: The artist describes Fauriaux's character as clever, friendly, helpful, protective − just as spiders »protect« people from mosquitoes, which were plentiful in the family's country house. Artistically, however, the mosquitoes embody Bourgeois' father, who cruelly humiliated his daughter. For ten years he also had an affair with the governess who lived in the house with them. Fauriaux tacitly accepted this, revealing another parallel to the patiently lurking spider. »The crafty spider, hiding and waiting, is wonderful to watch«, Bourgeois explains her fascination. 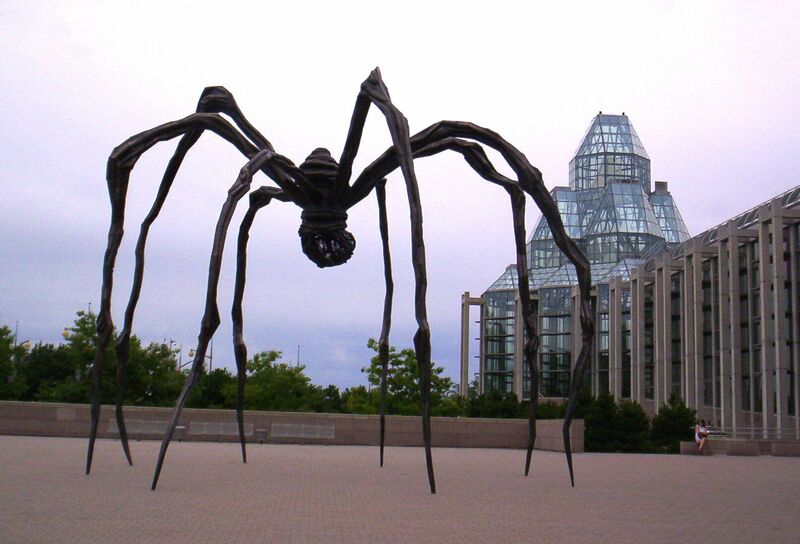 Art is therapy for her; the public does not interest her. After the death of her mother in 1932 and a failed suicide attempt a few days later, Bourgeois changed her field of study from mathematics to art. Since then, work has helped her get through the day without harming herself or anyone else. This was also confirmed by her assistant, who had known her for 20 years.

Expressions of violence can be found in many of Bourgeois' artworks, including her attempt to depict complicated mother-daughter relationships: » I cut her head off. I slit her throat. Still, I expect her to like me «, is how Bourgeois describes her sculpture The She-Fox (1985) made of black marble and steel. Another cunning predator is associated with Fauriaux, whom Bourgeois also described as possessive. The fox represents her mother, decapitated and with her throat slit. The small female figure crouching next to the fox is herself. The spider symbol served more as therapy for the artist, which is why she dealt with it many times in the following years.

Spider sculptures in the 1990s In 1994, Bourgeois created his first sculpture Spider, which was preceded by numerous spider drawings. Geometric forms determined the work, which is almost three metres high. The body of the spider consists largely of a cage containing a white marble egg. The subsequent works Spider II to Spider V (1995-1999) are more organic, smaller and partly more naturalistic, without the eggs so familiar today, which remain inaccessible behind the metal web. The spiders are given bodies and heads based on their models from nature, even the behaviour is imitated: Spider IV, about one and a half metres long, is mounted on the wall like a real spider.

Bourgeois also experimented with the spider within her series of works Cells: Spider (Cell) from 1997 is characterised by particularly long, thin legs with which the animal encloses a steel cage. Viewers are supposed to enter the cage, take a seat on the chair and feel the maternal protection. This work marked a decisive step in the development of the sculpture, which visualises Bourgeois' statement almost obtrusively and also differs from other spiders in its title: Maman. 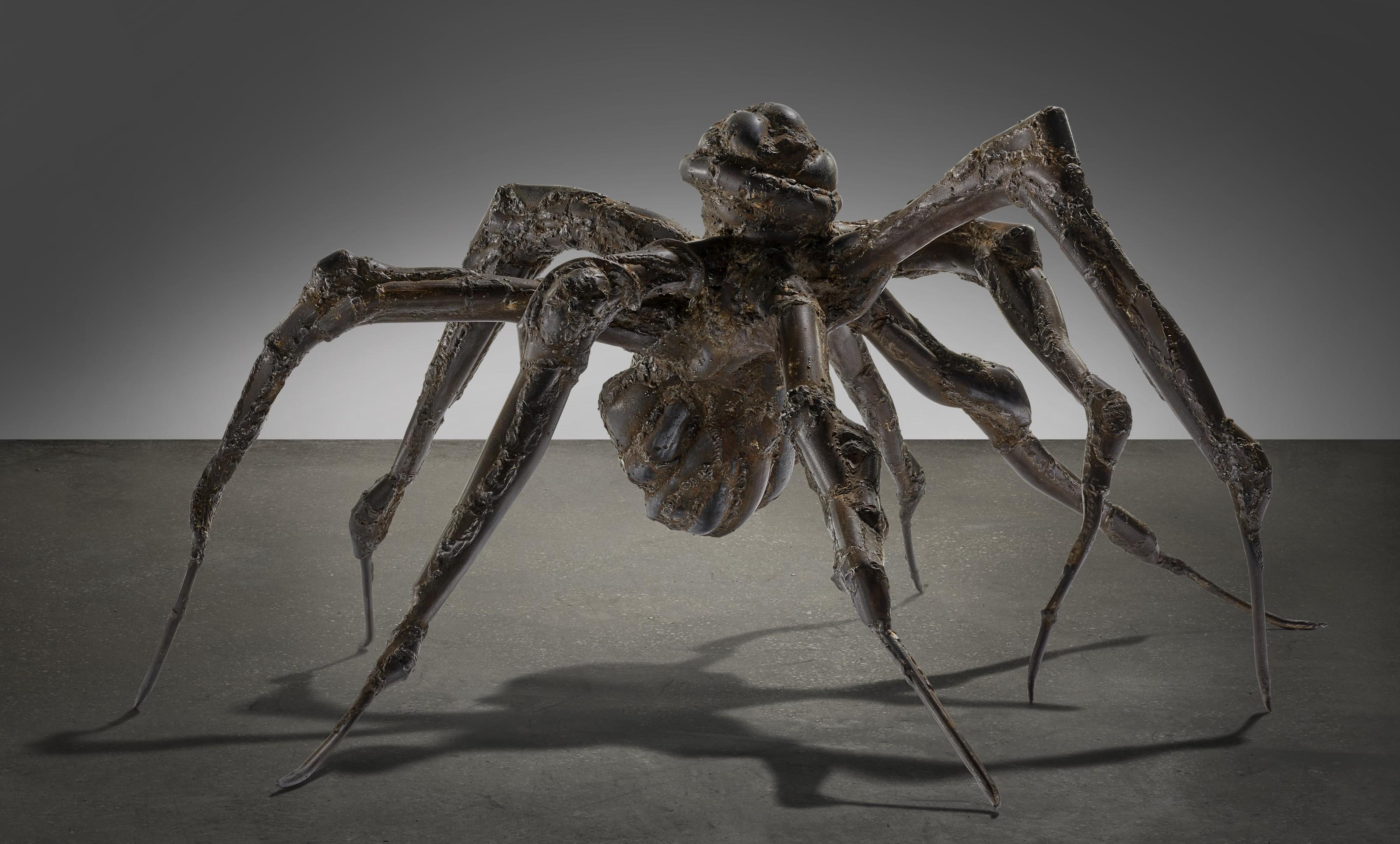 Bourgeois' famous work is one of the largest sculptures in the world. In the house-high spider, the artist incorporates the architectural aspects of her Cells − with the effect that one feels like a child when standing under or next to the sculpture and looking up at the mother. With this spider, Bourgeois created a universal symbol for the mother, inspired by her own childhood, but without the personal reference from The She-Fox, in which Bourgeois also depicts herself. The original Maman is in London, the bronze casts are distributed worldwide to the USA, Spain, Qatar, South Korea, Japan and Russia.

Of particular importance is the mother's ability to protect herself and her children. Unlike other spider sculptures that carry eggs in their metal cage, Maman's has a large dent on one side. A fact that is disregarded in most interpretations. The 17 white and grey marble eggs were deliberately attacked, but Maman was able to defend them. She now bears the damage. Through this narrative, Bourgeois connects Maman to the She-Fox: motherhood is impossible without being hurt in some way.

Mother herself to three sons, one of whom died before her, and raised as one of three (unwanted) daughters, Bourgeois knows the extremes of mother-child relationships from both sides. But it was not just by chance that she chose the spider as a symbol, with which she also honours how much suffering mothers endure: »If you hit a spider's web, the spider doesn't get angry. It continues to weave and repair it.«

Chimeras as a cure? 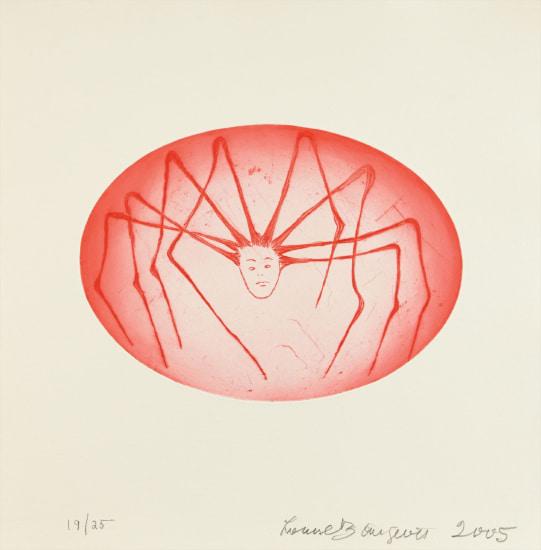 In the early years of the 21st century, Bourgeois focused on a different aspect of motherhood: pain and how it might be overcome. The new spider drawings move significantly away from the 1990s investigations and combine spider legs with human bodies and faces. Bourgeois also developed sculptures from this, such as Spider (2003). A sculpture barely 25 cm high, it consists of a female rag doll with eight spider legs made of steel. Bourgeois thus picks up on her fabric artworks, which have enriched her oeuvre for many years. For the artist, the rag dolls meant revenge for her mother on her father. With oversized needles, Bourgeois made grotesque dolls that symbolised toil, diligence and pain. Here, in the small sculpture from 2003, the doll is supported by strong spider legs that give it support and emphasise its combative side.

»The purpose of sculpture is self-knowledge«, Bourgeois once explained her art. Is the realisation now, after her great successes, that she has found a way to overcome suffering? 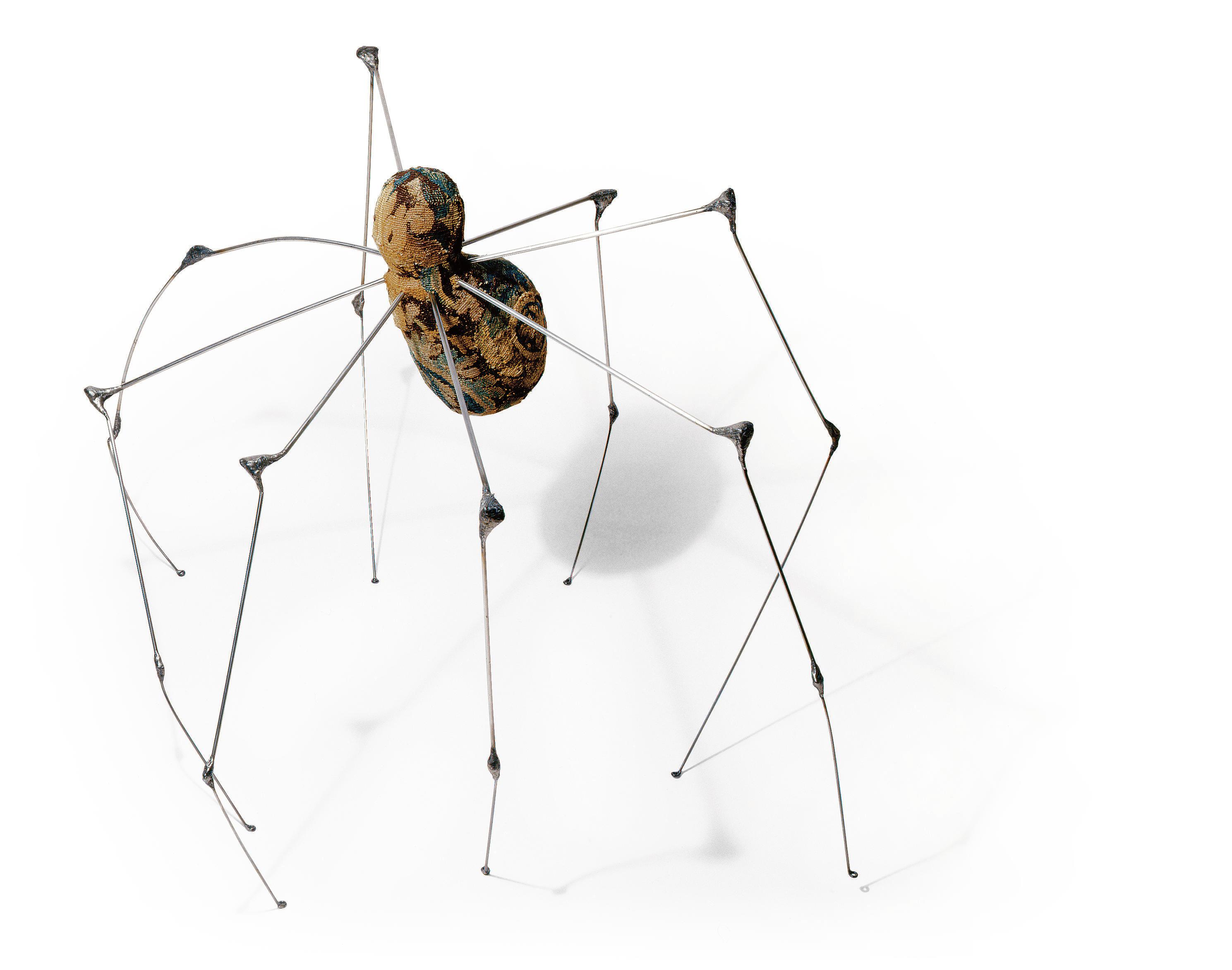 More on the subject Louise Bourgeois

Three works from the middle of her life tell of Louise Bourgeois' process of reappraisal: Janus Fleuri (1968), The Destruction of the Father (1974), and A Banquet/A Fashion Show of Body Parts (1978) deconstruct gender, the body, and one's own father. They bespeak the story of how Bourgeois therapized herself in mid-life and the pleasure she gained from destroying everything.