Three paintings and their narrative

Basquiat: A Crown for the Artists of the Street

Hardly any other artist is attracting as much attention on today‘s auction scene as Jean-Michel Basquiat. His paintings are currently among the most highly traded works of art, with 55 of his works fetching proceeds in the double-digit millions. The three most expensive works in particular changed hands only recently and have an impressive story to tell.

The painting Untitled (1982), featuring a self-portrait by Basquiat, sold for $110.5 million at Sotheby's and has since held the price record for a work by a U.S. artist. Recently, the painting Untitled / The Devil (1982) went under the hammer at Phillips for around 85 million dollars, and an end to the "Basquiat boom" is not yet in sight.

The works from 1981 - 1983 are particularly popular, because they represent Basquiat's rapid rise from graffiti sprayer SAMO© to an established artist. The image-text collages show a very unselfconscious, unique handling of color and material and take on a special role in the then already wild New York art scene of the 1980s. Let's take a closer look at the stories behind Jean-Michel Basquiat's three most highly traded paintings.

When this work was completed, it was an unseen novelty in the U.S. art world of the 1980s. It shows the self-portrait of a black artist - in the guise of the devil. Self-confident and menacing, the black skull with its colorfully highlighted eyes looks at the viewer. Colors in red, blue, yellow splash wildly out of the background and frame the skull. Is this look a threat to the art scene dominated by white men? Does it stand for the equality of all people? Or is it meant to remind us of our transience? Death was always present in Basquiat's life. Like his idols from jazz music and sports, the artist tried to test the limits further and further through drugs and excess until he himself died of a heroin overdose in 1988 at the age of only 27.

Measuring 238.7 x 500.4 cm, Untitled / The Devil is one of Basquiat's largest paintings. It is part of a series of large-scale works that the artist made during a stay in Modena, Italy.

The evolution of demand for Basquiat's entire oeuvre, can be exemplified by the sales history of Untitled / The Devil. After changing several galleries in New York and Asia, the painting was auctioned at Christie's in 2016 for around $57 million. Then, in May 2022, Japanese online entrepreneur Yusaku Maezawa bought The Devil for $85 milllion at Phillips in New York. This result not only surpassed the $70 million estimate, but also set a record for profits in its 226-year history.

Basquiat had been preoccupied with human anatomy since early childhood. As a boy, he was given a copy of the famous medical book Gray's Anatomy during a hospital stay, and since then his enthusiasm for anatomy never left him. In the large-format trilogy with skulls from 1981 - 1983 Basquiat processes this fascination for the human body. In This Case is the last work in this series.

The work depicts the young African-American street artist Michael Stewart, who was killed by police violence in 1983. Basquiat pays tribute to him with a 97.8 cm x 187.3 cm painting depicting the young man's silhouette. At the same time, the portrait is not very flattering; the face is literally beaten green and blue, the blood red that is present everywhere mingles equally with foreground and background. A light blue stain on the left side of the picture (is it an eye?) melts into numerous tears, covering large parts of the mouth. The only clearly recognizable eye on he right half of the picture fixes the viewer seeking help. Rage and despair scream out of this look. The open mouth with its green teeth seems to say something, but the drops from the upper stain cover it and express the wordlessness of the artist.

The painting can be understood as a deeply emotional protest against the police violence and state-sponsored racism of the time and it represents in an intimate way the artist's dismay. 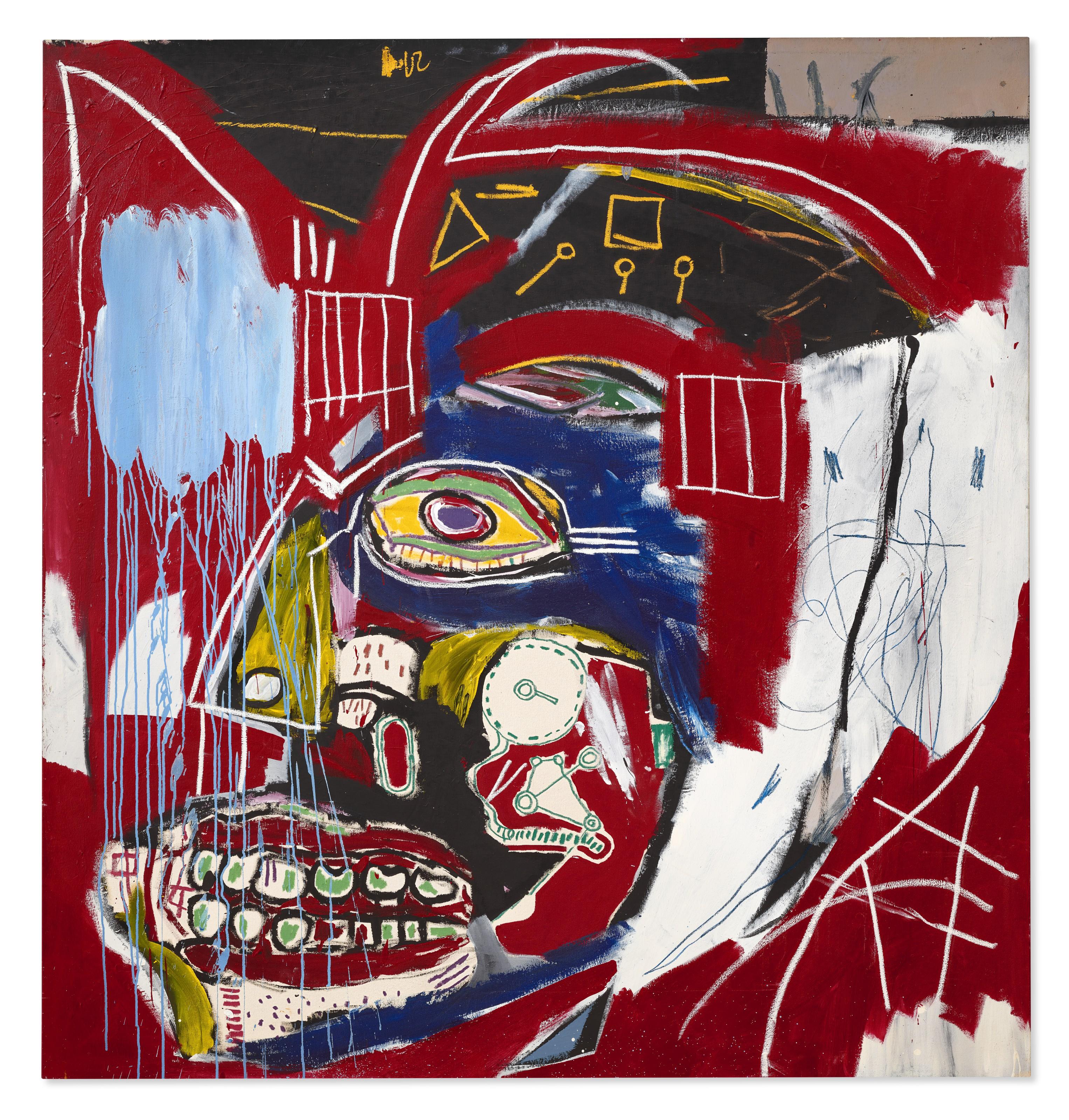 In This Case has an imposing provenance: in 2007, Valentino co-founder Giancarlo Giammetti acquired it from Gagosian. In 2018 - 2019, it was exhibited during the Louis Vuitton Foundation's Paris Retrospective. It last changed hands in May 2021, where it was auctioned at Christie's for $93.1 million. This brought it to almost twice its estimate of $50 million.

Another Untitled work surpassed every expectation when it went under the hammer at Sotheby's in May 2017. It was purchased by Yusaku Maezawa, the collector and founder of the online fashion platform Zozotown for $110.5 million. Called up at $57 million, Sotheby's previously estimated the painting's proceeds at around $60 million.

Since the painting was sold for just $19,000 in 1984, it has hardly been exhibited publicly. Yusaku Maezawa now bought this other Basquiat for a record amount for his private museum in Chiba, Japan. His goal, he says, is to make the painting accessible to the general public. 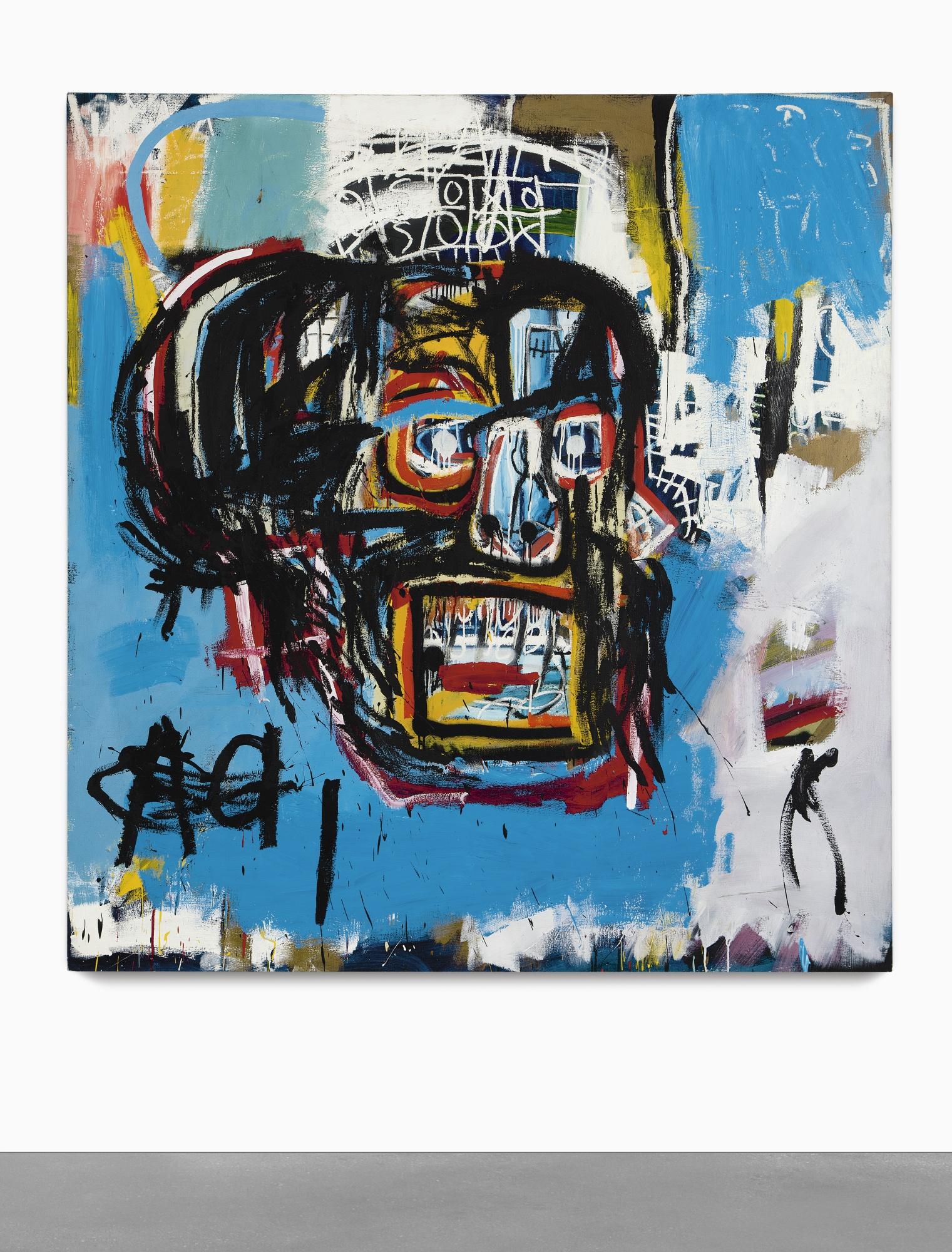 The self-portrait depicts Jean-Michel Basquiat in a very raw, aggressive way. The face, stripped to the skull, stares fixedly past the viewer. The mouth, stylized into a square, is wide open, revealing the tongue and teeth. The head, as well as the background of the picture, are built up from several layers of paint. The dynamically applied layers of acrylic paint, wax pencil and spray paint overlap like graffiti on a decaying wall.

With this portrait, the artist refers to his origins as a famous street artist SAMO©. His trademark, the three-pronged crown, is painted over with characters and scratched. Nevertheless, it is enthroned on his skull in a clearly recognizable manner. It confidently proclaims: Jean-Michel Basquiat was the person who brought this new, spontaneous art to the galleries and museums. All honor is due to him.

More on the subject Jean-Michel Basquiat 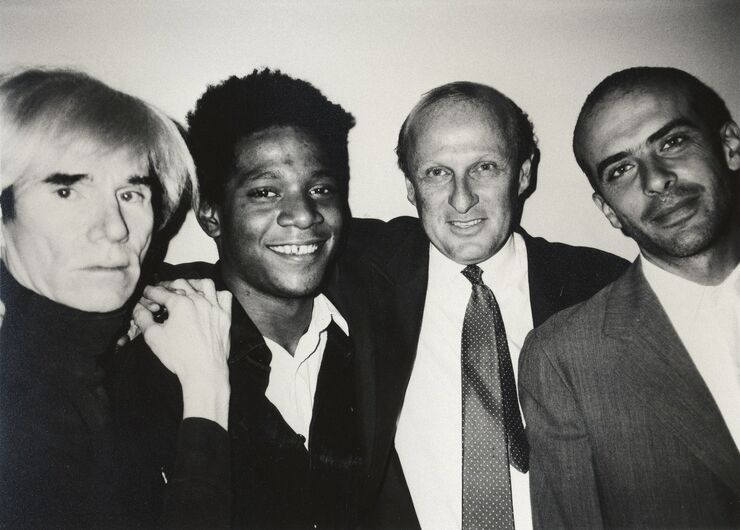 Ten things that made Jean-Michel Basquiat an art icon

The work of Jean-Michel Basquiat is firmly rooted in U.S. art history of the 1980s, and his name is associated with artistic greats such as Keith Haring, Andy Warhol, and Jackson Pollock. But why was this decade so influential for the artist and what makes his art still so current?

Highlight at auction in May

The upcoming Phillips auction on May 18 will feature a special highlight: Jean-Michel Basquiat's large-scale painting Untitled from 1982 is up for sale. The Japanese entrepreneur Yusaku Maezawa had acquired it in New York in 2016.

Jean-Michel Basquiat's Untitled (1982) sold at auction yesterday at Philips for $85 million, up from $57.3 million six years ago. Newcomer Anna Weyant celebrates another success with a sale value of 730,800 US dollars. 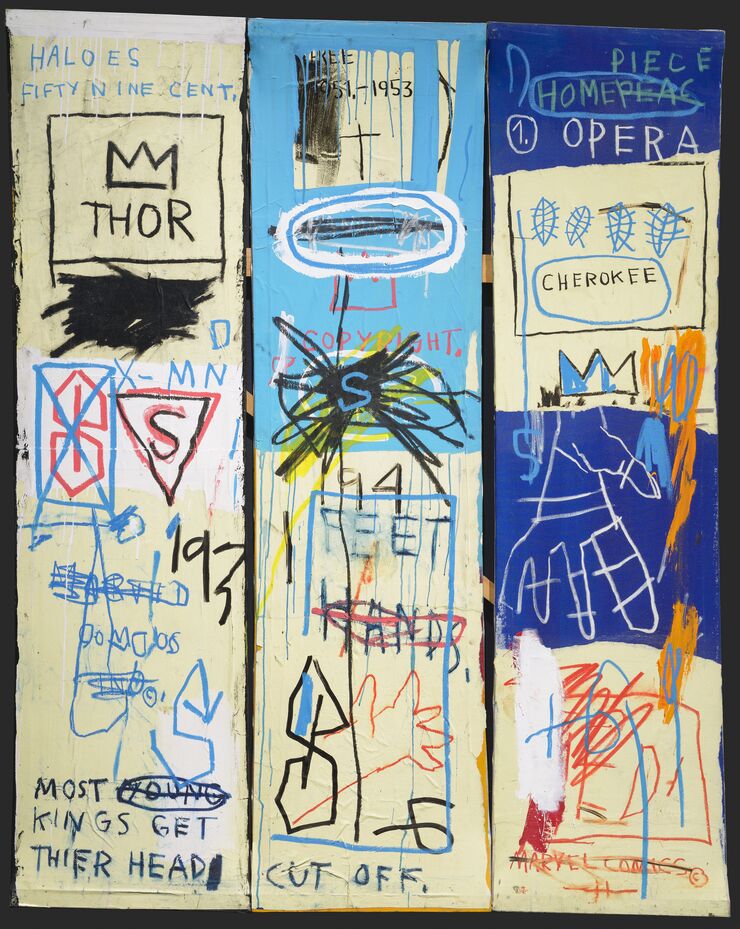 About 200 works by Basquiat exhibited for the first time

When an artist's family organizes an exhibition, it becomes unique. In Jean-Michel Basquiat: King Pleasure©, starting April 9 in New York, more than 200 paintings, drawings and ephemera by Basquiat will be on display, most of them for the first time.

Jean-Michel Basquiat's Untitled (1982) sold at auction yesterday at Philips for $85 million, up from $57.3 million six years ago. Newcomer Anna Weyant celebrates another success with a sale value of 730,800 US dollars.