Mathematics is often associated with abstract concepts, cold logic, or impractical constructions. Far fewer are the associations with creativity, let alone art. Still, mathematicians will tell you about the beauty of their constructions and proofs. Can this beauty only be appreciated by the innated? Does it need a degree in mathematics to recognize the aesthetic values that the field has to offer? In this sense, it seems rather difficult to combine mathematics with artistic disciplines like visual arts, music, or performing arts, just to name a few.

Connections between art and mathematics go back to antiquity

However, a closer examination of both mathematics and arts reveals a multitude of links between these fields. These links have been established throughout a long historic relationship that dates back all the way to the 4th century BC and possibly even to earlier times. In antiquity, Aristotle states that »the chief forms of beauty are order, symmetry, and definiteness, which the mathematical sciences demonstrate to a special degree.« It does not come as a surprise, then, that famous artists throughout history turn to mathematics and dwell from it. 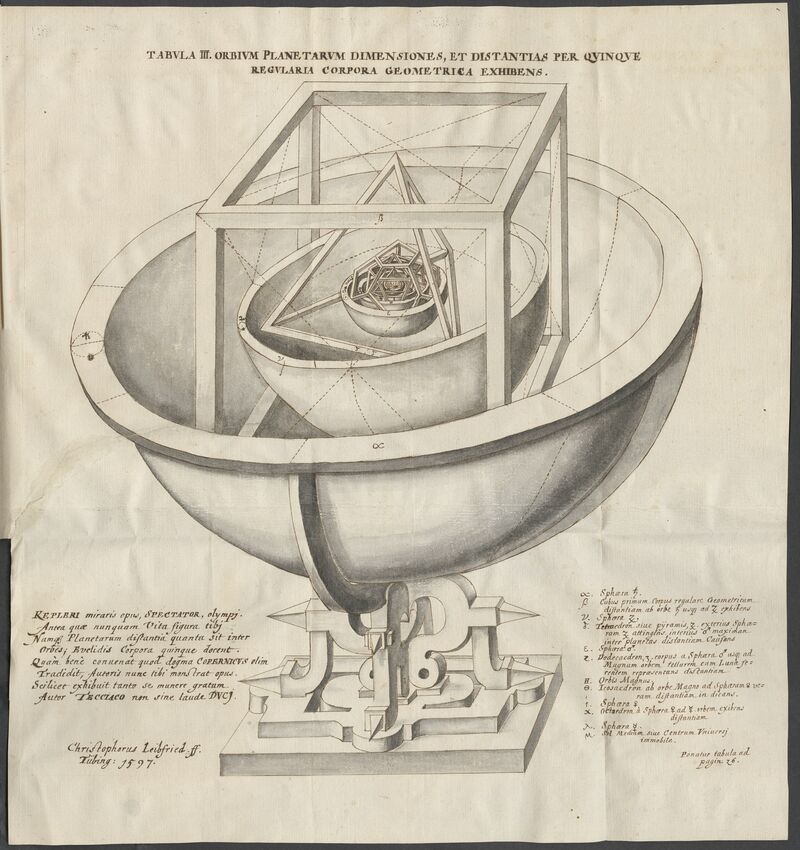 Copyright: https://commons.wikimedia.org/wiki/ Category:Mysterium_Cosmographicum_solar_ system_model#/media/File:Kepler_Platonic_Solids.tif
Illustration of the universe’s structure, according to Johannes Kepler, given by a nesting of the five Platonic solids. Printed in Kepler’s astronomical work »Mysterium Cosmographicum«

Leonardo da Vinci, for instance, is one of the most recognized renaissance painters, however, he also had a keen interest in the natural sciences and in mathematics. He created several artistic renderings of geometric structures. The use of perspective in renaissance paintings is another great example of the use of geometric principles towards the benefit of artistic practice. The relationship also holds up the other way around. Mathematicians include rich and costly illustrations in their printed works to convey their findings. Johannes Kepler, for instance, shows an engraving of nested polyhedra to relate his computations of the movements of planets to his philosophical world-view. And in particular after the developments by René Descartes, which allow for instance numbers or equations to be drawn, mathematical proceedings exploded with illustrations. Some mathematicians went so far as to create plaster sculptures to convey their findings on three-dimensional structures, as collected by the Göttingen Collection of Mathematical Models and Instruments.

Further developments in the 20th and 21st century

In this circle of inspiration, again and again, artists picked up mathematical concepts and used them to provide their own, unique perspective on them. Examples include Maurits Cornelis Escher, whose work has strong ties to so-called wallpaper groups, the mathematical foundation of crystallographic structures. The work of other artists, like the iconic paintings of Piet Mondrian, carry a distinct geometric and mathematical flavor, while explicit ties to corresponding scientists are not known of. This is different for, e.g., Bathsheba Grossman, who takes inspiration for her sculptures directly from mathematical concepts such as minimal surfaces, knots, or topological structures. These and many other artists have proven and continue to prove how fascinating and beautiful both mathematical and mathematically-inspired artworks can be. 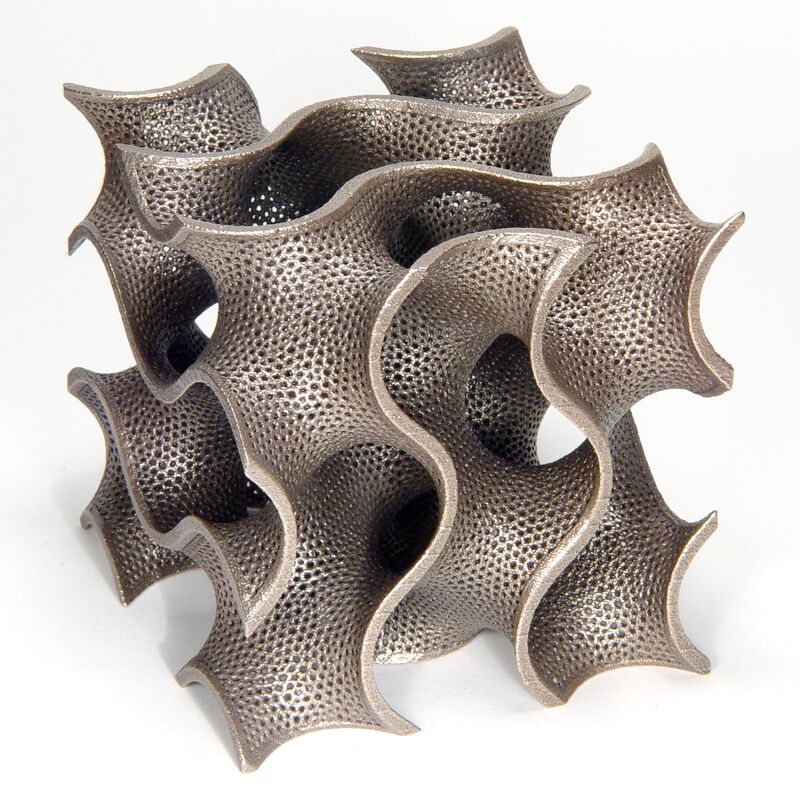 While collaborations between mathematicians and artists have occurred throughout history, in the last decades, more structure has emerged to facilitate this fruitful combination. One example is the Bridges Conference, a gathering of mathematicians and artists that has taken place annually since 1998. The conference has been held in North America, Europa, and Asia and promotes the interdisciplinary presentation and publication of mathematics in connection with art, music, architecture, and culture. Works on how to include these connections in an educational framework are also welcome, just as hands-on workshops, poetry readings, or the enactment of mathematically-inspired plays. This is the largest gathering in this field, organized by the Bridges Organization. The organization also hosts several galleries for mathematical arts, as presented either at the gallery of a Bridges Conference or, e.g., also at the mathematical art galleries during the Joint Mathematics Meetings of the American Mathematical Society. Aside from these conferences, there are journals devoted to the publication of research on mathematical art. Examples include the Journal of Mathematics and the Arts, founded in 2007, or the Leonardo journal, founded in 1968, where the latter is rather a host of more general science and art collaborations. All these outlets provide an idea on both the rich activities taking place and the many people currently involved in this field.

A new minisymposium to facilitate exchange

While international conferences on mathematics and arts are held on a regular basis, there is a lack of a German- or European-centered meeting for the exchange of ideas and inspirations as well as the presentation of works. To fill this gap, in 2020, a minisymposium on »Mathematics and Art« was organized for the first time at the annual meeting of the German Mathematical Society. Despite the more than 130-year history of the German Mathematical Society, it was the first one of its kind within the context of an annual meeting. As one minisymposium cannot possibly cover the entirety of interactions between mathematics and the arts, the call for papers did provide some restrictions. Generally, those works were sought for that either consider artistic pieces from a mathematical perspective or render mathematical concepts in an artistic form. Particular importance was put on the explicitness of the mathematical components, i.e., they should not be assumed to be self-explanatory, but rather be addressed actively. The minisymposium saw four sessions with a total of 15 speakers (9 male, 6 female) from Germany, the US, Argentine, the Netherlands, and Poland. The subject areas of the four sessions were diverse and included, for example, talks about different artistic objects as starting points for mathematical learning. Two other contributions used statistical models to analyse, visualise and discuss art. For a detailed discussion of selected contributions of the minisymposium, we refer to an article in the online journal »w/k – Between Science and Art«. 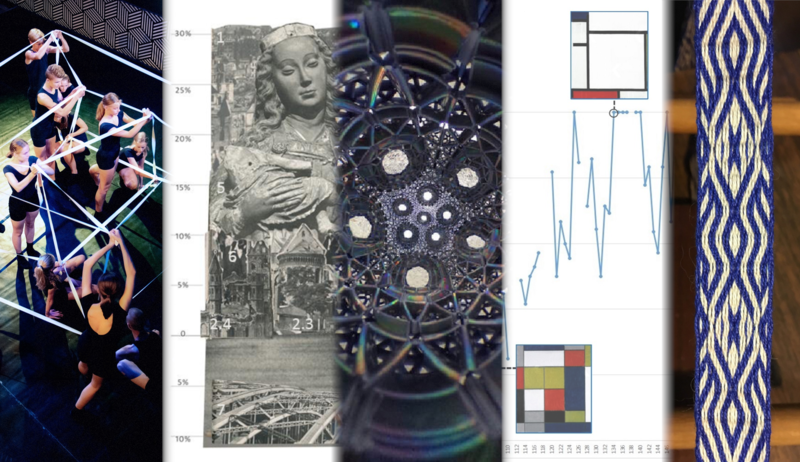 Copyright: https://between-science-and-art.com/mathematics-and-arts/
A collage of various projects presented at the 2020 minisymposium »Mathematics and Arts«

Due to the great response to and the very positive feedback by both the speakers and audience members on the first rendition, the joint annual meeting of the German Mathematical Society and the Austrian Mathematical Society in September 2021 saw a second minisymposium on »Mathematics and Arts«. A total of 21 speakers (9 female, 12 male) gave 15 presentations separated into five sessions. These sessions again tackled various topics. For example, three talks discussed mathematically inspired woodworks while the talks of another session focused on the realization of symmetries via paper models, both as three-dimensional models and as origami. Other talks used computers to create renderings for interactive teaching videos, for exploration of perspective in 17th century Dutch paintings, or for science communication movies.

As mathematics and arts is an interdisciplinary field, the people who move and act in it are very diverse in terms of their scientific or artistic backgrounds, their education, and their motivations. Some of them create mathematical artwork to better understand the incorporated mathematics, some do it to further explore the mathematics’ artistic potentials. In any case, these projects require interdisciplinary knowledge, either within one person or within an acting team. Examples for the former are, e.g., Rachel Quinlan or Joshua Holden who are mathematicians by training, but explore their mathematical structures via artistic means. In the case of Rachel Quinlan, she uses origami to illustrate different elements of the wallpaper group, following in the path of the aforementioned M.C. Escher. Joshua Holden uses his knowledge on random processes to write computer programs that generate weaving patterns or drum kit solos. 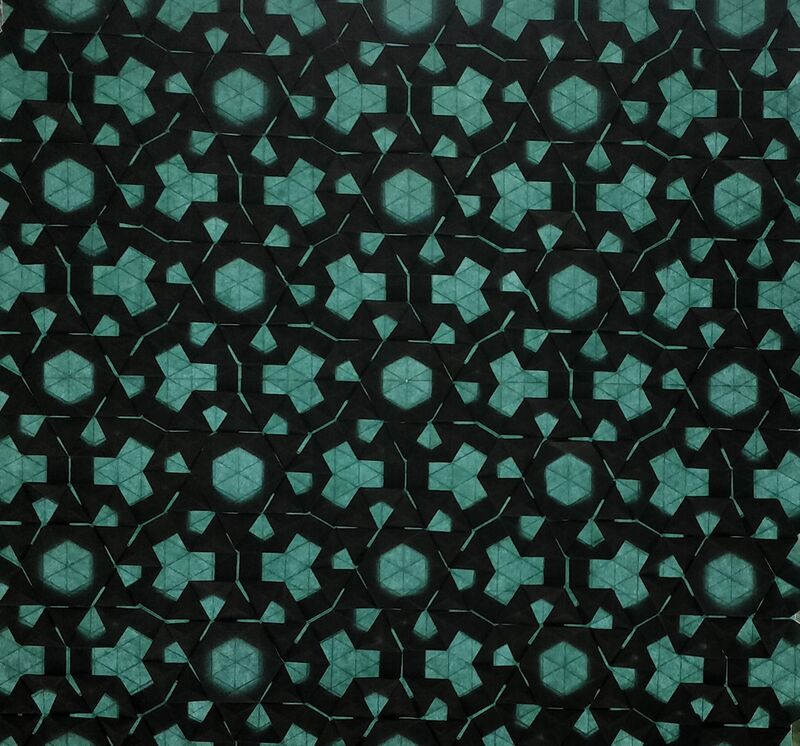 Copyright: Rachel Quinlan
The symmetries of a wallpaper group, realized via an origami folding

Interdisciplinary teams benefit from all members bringing their respective expertise to the project. When Anna M. Hartkopf provides her mathematical understanding of four-dimensional geometries and René M. Broeders adds his experience as artistic lead, truly marvelous performances arise. The same holds for the sculptor Teresa Hunyadi who creates marvelous wood-carved renditions of penrose tilings that are generated by Dave Murray-Rust, an expert in human-algorithm interaction. The case of Aubin Arroyo and Jean-Michel Othoniel was different: Both engaged with so-called wild knots independently: Aubin Arroyo as a mathematician and Jean-Michel Othoniel as an artist. They later found out about their respective work and started a collaboration. This resulted in an exhibition and a book that the two wrote together. Being an online format the two symposia also provided inclusive participation options for, e.g., scientists and artists from South America or for teachers that usually would not travel to Europe for a short talk or that simply lack the funding to do so. Therefore, it is important to continue these formats in an as-inclusive-as-possible manner, for which hybrid in-place/virtual conferences provide the perfect means. 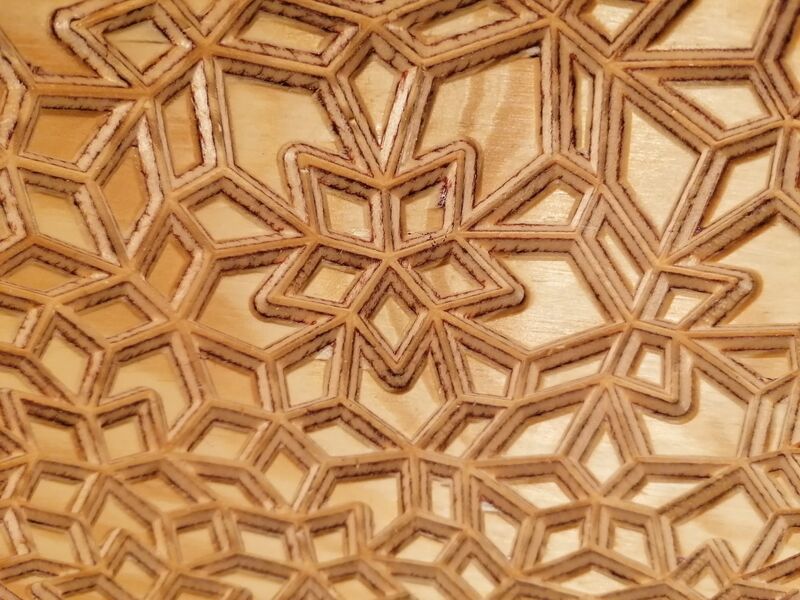 We hope that you have enjoyed this short glimpse into the world of mathematics and arts. If you want to collect first-hand experience, feel free to reach out to us at dmv.math.art@gmail.com and we will gladly add you to our mailing list, providing details on upcoming events. The next gathering is planned to take place at the annual meeting of the German Mathematical Society in Berlin from September 12th to 16th 2022. We hope to see you there!

Further Reading and other material

An article on the first minisymposium in the online journal »Between Science and Art«: https://between-science-and-art.com/mathematics-and-arts/

A YouTube Playlist of all talks given at the first minisymposium: https://www.youtube.com/playlist?list=PLIQnnJvM8OOknWUcdVA9s_pNMDpLascmg

Article in the blog of the German Mathematical Society on the first minisymposium: https://www.mathematik.de/dmv-blog/2848-mathematik-und-kunst-%E2%80%93-wie-passt-das-zusammen

A YouTube Playlist of all talks given at the second minisymposium: https://www.youtube.com/playlist?list=PLIQnnJvM8OOkdVa7p-uYbMs5OnR2Gcza-